Search For Your Rental
IN ISRAEL OR NEAR YOU
Pick-up 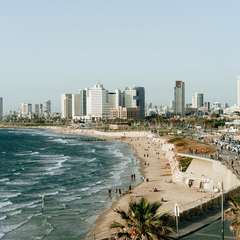 The State of Israel (IL) is a tiny yet significant country that’s considered the epicenter of the Holy Land in the Middle East. A number of historic, religious, and geographic influences result in a blend of cultures that attracts visitors and pilgrims by the millions annually. Israel lies on the eastern edge of the Mediterranean Sea, bordered by Jordan and the Dead Sea to the east, Egypt to the southwest, plus Lebanon and Syria to the northwest. Though not particularly blessed with an abundance of natural beauty, Israel is considered incredibly important to the Jewish Diaspora, regarded the cradle of civilization as well as the birthplace of agriculture as we know it. The first post-Ice Age humans to transition from nomadic hunter-gathers to an agrarian lifestyle, known today as Natufians, settled in the region of Jericho nearly 14,000 years ago. So if you venture here, you’ll be connected to among some of the earliest of civilizations on the planet.

Getting around the highly urbanized areas of Israel is more efficient and economical when you rent a car from one of the major global brands. For access to some of the more remote attractions, an Israel car hire is absolutely essential unless part of a tour group. All destinations in Israel are connected to a well-maintained network of numbered highways and major roads. Generally speaking, north-south routes are odd-numbered, and east-west route even-numbered; the lower the number, the more important the road. Most road signage is clear and particularly informative. Traffic controls are a little different than what most Western visitors are used to, so it’s best to get familiar with Israel traffic practices prior to arrival. Although local drivers tend to be aggressive and impatient, the omnipresence of police keeps things relatively civil on the roads, and Israel is comparatively safe in terms of traffic fatalies — if we’re talking about the Middle East. Otherwise, driving in Israel is no more or less dangerous than driving in Paris.

Tips and advice for renting a car in Israel

Most traffic control signals have an arrow on top that indicates the direction of travel. Only a solid green light indicates that travel in all direction is allowed.

Very few intersections are controlled by all-way stop signs. If you are facing a stop sign, that means you must give way (or yield) to all traffic in other directions, only moving forward when the coast is clear.

If you must pull over to the shoulder of a highway and exit the vehicle, you’re required by law to wear a reflective vest that you’ll find in the glove box of all Israel car rentals.

All law enforcement vehicles on active duty are required to have their blue lights flashing for the duration of travel. Thus, this doesn’t mean you’re being pulled over. Most police will bark instructions via loudspeaker if they want to stop you for a chat. Be advised that the directions will most likely be in Hebrew — at least until they recognize that you’re a foreigner (English is widely spoken). Furthermore, police don’t need a reason to stop you.

Normally, the advice for driving in a foreign country tends to err on the side of caution. However, driving in Israel requires a certain amount of confidence and a lack of hesitation on the roads. Your right-of-way will be quickly snatched up by other drivers who recognize your reticence to make a move.