@ALL LOCATIONS IN KUWAIT 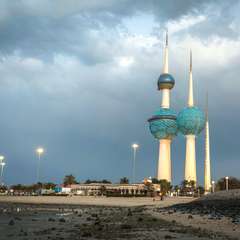 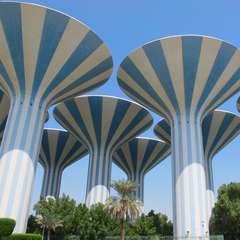 The tiny but oil-rich emirate of Kuwait (KW) is located at the northwestern head of the Persian Gulf, in one of the most arid and inhospitable regions on the planet, sharing borders with Iraq to the north and Saudi Arabia to the west. Home to one of the world’s deepest natural harbors, Kuwait City is the center of commerce and gateway to the region for international travelers. As a leisure travel destination, Kuwait has two things going for it: the beaches of Salmiya and the highly urbanized atmosphere of Kuwait City. Otherwise, the majority of visitors to Kuwait are involved in the country’s oil industry.

Central Kuwait City is served by an adequate bus system geared toward expatriate commuters, but getting anywhere else — including suburban residential areas — is only possible by private transport. Therefore, most visitors will rely on expensive taxis or take advantage of cheap car rentals and inexpensive gasoline prices. Kuwait’s road network is in good shape, and numbered expressways form an expanding grid system that links Kuwait City to secondary cities along the coastline. All road signs are in Arabic and English, and routes to major destinations are clearly and logically marked. The primary downside of driving in Kuwait is the Middle Eastern driving style, characterized by reckless behavior and disdain for traffic rules and general safety. To be frank, it’s not a place for beginners, but drivers experienced in the region will see little to worry about.

Car rentals in Kuwait are supplied by Europcar, Avis, Hertz, Budget and Sixt, who offer the full spectrum of vehicles. The sedan class is dominated by standard, intermediate, and fullsize 4-door cars. A decent range of 7-12 seater minivans are complimented by mid and fullsize SUVs. Of course, budget minded travelers can settle into a compact or economy sedan.

Tips and advice for renting a car in Kuwait

Check with your car rental vendor about restrictions on travel into Saudi Arabia or Iraq, if applicable to your travel itinerary.

If involved in a traffic accident, do not move the vehicle, stay on the scene, and wait for police to arrive.

Kuwait is one of a handful of countries where making an offensive gesture is a crime, and taken far more seriously than any sort of dangerous driving tactic that caused you to lose your cool. So, think twice about obscene gestures to a driver that cut you off in traffic.

There are no toll roads in Kuwait.

Oversized SUVs and four-door pick-up trucks dominate Kuwaiti highways. Be forewarned that if you do rent a small car, you’ll be dwarfed on the roads, which could contribute to additional intimidation behind the wheel.

Kuwait’s complex address system wreaks havoc on navigational systems. GPS seems to do better than Google Maps, but you’d be wise to have a good hardcopy map on hand, just in case.