@ ALL LOCATIONS IN
Lebanon 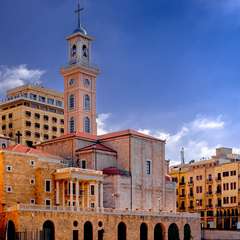 This Middle Eastern republic of Lebanon (LB) lies on the eastern shore of the Mediterranean Sea and shares land borders with Syria to the northeast, and Israel to the south. Its primary attractions for tourism are beaches, historic sites, and the cosmopolitan atmosphere of its capital city, Beirut. The terrain consists of a low-lying yet hilly coastline and a mountainous ridge that runs the length of the country, which gives way to desert highlands in the east.

Lebanon is uncommonly wet and mild for the region, with July and August the warmest and driest months of the year. Its collection of ancient Roman temples and ruins are among the most popular Lebanese destinations, led by the Al Bass Archaeological Site in Tyre, one of the most prized Roman archeological sites in the world; and the Jeita Grotto, which has been considered for Natural Wonder of the World status.

Visitors will be obliged to rent a car in Lebanon for a number of factors.

First and foremost, it’s far more efficient and convenient for reaching the top attractions, which surprisingly include some top-notch ski resorts in the mountains. Skiing in Lebanon — who knew?  Meanwhile, public transportation is adequate in Beirut, but getting anywhere else — and especially those fancy archeological attractions — is practically impossible without a private vehicle.

Lebanon’s network of highways and major roads is in fair to good condition, and the country’s general north-south orientation is easy to navigate. Most major routes are at the mercy of the topography, but for the most part, go straight to the main attractions in the most efficient manner.

Like most countries in the Middle East, local driving habits take some getting used to, but driving is generally considered safe. On the downside, traffic congestion is really bad in Beirut and other major cities, road signage isn’t as comprehensive as you’d like to see, and driving times are extended by twisting mountain roads. Common sense and road awareness will go a long way toward making your Lebanese car rental experience that much more pleasant and comfortable.

Tips and advice for renting a car in Lebanon

When compared to some countries in the region, car rentals in Lebanon are slightly toward the pricey side of the spectrum. Fuel is likewise a bit more costly.

Despite unrest in the region, Lebanese people are very friendly and welcoming of foreign travelers. Be advise that like everywhere else in the Middle East, you’ll be expected to behave with courtesy and respect for the local customs.

Lebanon’s multi-cultural society is a mix of Muslim, Christian, and Jewish influences. Thus, holidays for all three faiths are observed equally. It’s a good idea to book a trip around holiday periods in order to avoid general inconveniences.

Lebanon is a fairly small country, and it’s possible to drive end-to-end in 3-4 hours under ideal conditions. However, there are certain areas of the country that are questionable for visitors, particularly around the border with Israel.

Car rentals in Lebanon may or may not be allowed to be taken out of the country. It’s completely up to the car hire provider; however, driving into Syria is not recommended for obvious reasons.

You’re advised to register with the embassy of your home country to stay abreast of travel warnings when visiting Lebanon.

Are you driving a rental car in Lebanon?

Frequently asked questions about renting a car in Lebanon

1. What is the best time of year to book a rental car in Lebanon?

2. Is it possible for one way rentals in Lebanon?

3. Should I rent a round trip or one-way rental in Lebanon?

4. Which location should I rent my car from in Lebanon?

5. Do I pay more fees and taxes for renting a car at the airport in Lebanon?

6. What insurance do I require for driving a rental car in Lebanon?

7. What is the best way to save money on rental car insurance in Lebanon?

8. Should I prepay my rental car booking in Lebanon?

9. What are the largest numbers of vehicle seats available for a rental car in Lebanon?

10. What types of sports and special cars are available in Lebanon?

11. Can I take my rental car across borders in Lebanon?

12. How do I inform the rental company I will be crossing a border from the Lebanon?