@ALL LOCATIONS IN SWEDEN 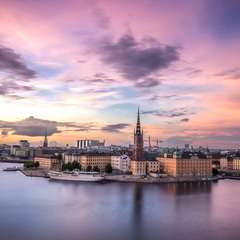 The largest of five Nordic countries, Sweden (SE) borders Finland to the east, Norway to the west, and linked to Denmark via the Öresund Bridge (Öresundsbron). The topography of Sweden is as varied as the landscape is vast, with rolling plains, river basins, marshes, mountains, and hundreds of islands located merely within the southernmost half of the country. Nearly half of Sweden lies above the Arctic Circle, and contains some of the most remote and rugged territory in the Northern Hemisphere. A significant amount of tourism is focused on outdoor sports and wilderness exploration. Meanwhile, Sweden’s modern urban centers are consistently rated among the best places to live in the world, with Stockholm, Gothenburg, and Malmö considered prime examples.

Like so many things about Sweden, public transportation in major cities runs like a finely tuned engine. It’s getting out of the cities that compel most visitors to rent a car. You’ll save countless hours of travel time by driving your own private vehicle. Now, driving in Sweden is generally considered safe, practical, and expensive. And again, it’s the cost of driving that most travelers will balk at before clicking Book My Car. However, in terms of value, few countries offer such a beneficial trade-off. You get access to an incomparable range of destinations and attractions, and plenty of ways to get there. Roads, even in rural areas, are consistently in good condition. Routes are clearly market and super efficient by international standards. And since most car rental fleets in Sweden are stocked with some of the most prestigious brand names in car hire, you’ll be getting around in comfort, safety, and style.

Cheap car rentals in Sweden are found by booking with one of the major brands like Alamo, Sixt, National, Europcar, Hertz, and Budget. Choose from 7-12 seater minivans, SUVs, fullsize 4-door sedans, compact and economy cars, estate wagons, and premium and luxury vehicles from the top names in automobile manufacturing.

Tips and advice for renting a car in Sweden

Contrary to international perceptions, not all Swedes are mild-mannered, practical people, and this is readily apparent on the roads in and around Stockholm, and to a lesser extent, Gothenburg. Many Swedish drivers exhibit aggressive driving tactics that create dangerous situations for other people just minding their own business. Speeding is a massive problem in major cities.

Speed cameras in Sweden tend to be stationed on slower national roads as opposed to expressways.

On highways of two or more lanes in both directions, the left lane is for overtaking. Passing on the right is illegal, but that doesn’t stop impatient drivers from doing it.

Two main routes — E4 and E18 — link Stockholm to Gothenburg. The northernmost route, E18, saves about an hour of travel time, while the southern route is considerably more scenic.

Cheap car rentals are nowhere to be found during the months of June through September. Otherwise, you can score some surprisingly good deals outside of peak season.

It should be common sense but be reminded that huge sections of Sweden are uninhabited, and the further north you go, the fewer road services you’ll find. In some cases, it may be over 100 km between fuel stations — in some cases, even further.

Are you driving a rental car in Sweden?

Here's some more in depth Sweden driving rules and guidelines for car renters:

There are some beautiful areas to explore in Sweden, and what better way to do it than in the comfort of your own vehicle, and at your own pace. Even though Sweden can be a tranquil place for your driving holiday if you take the right routes, there can be other issues to deal with such as wild animals and challenging terrains to get to grips with. Here are some tips and useful information to keep you safe and up-to-date while driving in Sweden.

You must adhere to the following speed limits, unless otherwise stated, when driving in Sweden:

Any other different speed limits are marked. You should keep a look out in case there are any modifications to the standard limits.

Speed cameras are in existence everywhere in Sweden and if detected breaking the speed limit, the consequence depends on the amount by which you exceeded it. The result of speeding could be anything from an on-the-spot fine to the revocation of your licence.

The legal Blood Alcohol Content (BAC) in Sweden is 0.02g/100ml, which is about the equivalent of just less than a can of beer. The consequences depend on the seriousness of the offence. In a case of drunk driving, a fine or six months in prison is usual. If the offence is more serious, for example, causing injuries, the driver could face up to two (2) years in prison. Causing a fatality through drink driving can mean up to eight (8) years in prison.

Police have the right to carry out random breath tests at any time and failing this test will result in automatic imprisonment.

Parking in Sweden is generally well signposted. It is usual that you will have to pay for parking in city centres or built up areas in general. Paid parking times are generally between 8am and 6pm. You are able to pay this at a meter or machine close to the parking location.

Parking should be done on the right side of the street, in the direction of traffic flow.

Restricted parking is indicated by a yellow sign with a red line across the bottom. Parking in a restricted zone will incur charges.

Any fines incurred are issued on the spot and must be paid at local post offices.

Sweden is a vast country with thousands of coastal islands, inland lakes, forests and mountains stretching almost 1600 km - from the mountainous wilderness above the Arctic Circle in the north all the way down to the plains and farmlands of Skane in the south. In between, you’ll find plenty of breathtaking views, picturesque cities and scenic routes.

For the most part, driving in Sweden is very simple and safe, offering plenty of great sights.  It is a wonderful way to experience this beautiful country. The Swedish law allows you to freely experience the Swedish countryside almost anywhere, making the outdoors available to everyone - on condition that you preserve and protect the natural environment.

Difficulty choosing where to go?

Depending on the time you have available, you can start in the south at ‘The Oresund Bridge’ (from the famous television series ‘The Bridge’) near the bustling town of Malmo. The bridge is a very impressive piece of architecture and the scenic way of getting from Copenhagen to Malmo.

From there a visit to the Shellfish Coast on the western side of the country, is a good idea. The main city in this region, Gothenburg, is best known for its food. Gothenburg cafés serve up the fantastic fika — a coffee or tea break served with buns and biscuits — which is a national institution that Swedes must partake in at least twice a day.

Bohuslan’s coast, north of Gothenburg, is renowned for its lobster and shellfish. It was here that the term ‘lobster safari’ was coined. The best thing about these safaris is that you get to prepare and eat your catch! A real ‘share with your friends’ moment.

Your next stop should be the capital city of Stockholm on the east coast. Stockholm, home to numerous royal palaces, parklands and museums, is an easy city to explore. Its 13th-century old town, Gamla Stan, is set on islands joined by bridges, with cobblestone streets and ochre-coloured buildings. The club and café culture is alive, winter and summer, and can be enjoyed at very reasonable prices.

The Northern Lights are calling

Going further north, consider driving through The High Coast of Sweden — a beautiful stretch of land between the cities of Harnosand and Ornskoldsvik.  It’s all about the views and you can easily explore the area on your own. Simply drive through the landscape along the E4 highway, which will also take you over the magnificent High Coast Bridge (Hogakustenbron).

Looking for more action? Try the regional activities such as hiking, rock climbing, fishing and kayaking, as well as cross-country skiing in winter, or even dog sledding!

Sweden's most northerly provinces, making up the Lappland region, has all the large parks and reserves with unspoiled nature to explore, with numerous outdoor activities.

Abisko National Park is just one of those must see places in the area. It is situated more than 200 km north of the Arctic Circle and the scenery here is truly breathtaking.

A location, this far north, and in the absence of light pollution, makes it an ideal place to see the Northern Lights.  In fact, it’s one of the most popular viewing locations in Scandinavia. Unfortunately, they are only visible during winter as the summer sky is far too bright.

Your farewell to Sweden could well be at the ’ultra cool’ Ice Hotel in Jukkasjarvi. As the name suggests, the Ice Hotel is built entirely from ice and snow and is reconstructed every winter. It is truly a unique work of art. Situated about 15-20 km from the city of Kiruna, it’s easily accessible via the E10 highway.

Now is a good time to see more and pay less in magical Sweden.  To find the best deals and choices for rental cars and accommodation you need not look further than Cheaperthancars and Cheaperthanhotels.

Dream about your trip to Sweden!