@ ALL LOCATIONS IN
Taiwan 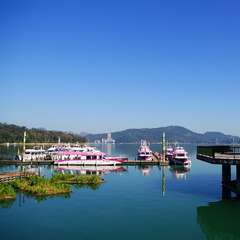 The small island nation of Taiwan is located in the South China Sea, and one of the more up-and-coming travel destinations in Asia. With a finely developed infrastructure and modern amenities around the island, Taiwan has a growing reputation for ease of navigation, paired with a tourist-friendly vibe that starts from the moment you land at one of its five international airports.

The island can be divided into four unique quadrants — north, south, east, and west — each with varied topography, climate, and people, and all best explored by car hire. Northern Taiwan is home to the capital city of Taipei, a vibrant and cosmopolitan jungle of concrete and steel, as well as the harbor city of Keelung. Western Taiwan is dominated by agriculture and industrial developments around the cities of Taichung, Tainan, and Kaohsiung. Southern Taiwan is its pleasure zone, featuring the town of Kenting and Kenting National Park — known as the “Hawaii of Taiwan” for its golden beaches and warm waters. Finally, the East Coast remains the truly undiscovered gem of Taiwan, with charming fishing villages that hug the coastline, and the highest inland mountain range in all of South East Asia.

Taiwan has transportation dialed down to a science. Aside from the towering mountain peaks, nearly every nook and cranny of the island is accessible by car. Some of the mountain roads may be narrow and steep, but roads are well maintained with posted signs in English and international pictograms. Traffic congestion is somewhat of a problem on weekends near the main attractions of Taroko Gorge, and central Taipei during rush hours; however, roads are constantly being upgraded and new roads added to the network on a regular basis. The western and southern regions are generally free of big city traffic. Local drivers are generally laid-back and law abiding, but bus and truck drivers have somewhat of a bad reputation for reckless driving on highways.

It’s best to go with a trusted name when you rent a car, and Taiwan car rentals are provided by Alamo, Avis, Budget, Dollar, Enterprise, Hertz, National and Thrifty. You’ll find get cheap car rentals on economy, compact, standard, and fullsize sedans, while SUVs and 7-12 seater minivans remain affordable alternatives for specialized transport.

Tips and advice for renting a car in Taiwan

Due to its mountainous interior, the majority of Taiwan’s long-distance highways have a north-south orientation, with only a couple of routes that cross the island east-west.

The Snow Mountain (Xueshan) Tunnel (aka Highway 5) links Taipei City to the city of Yilan on the east coast, reducing a normally two to three-hour drive on provincial routes to merely 45 minutes.

A healthy portion of visitors to Taiwan will spend some time in Taipei, which serves as the throbbing heartbeat of the country’s transportation system. Driving in Taipei is sometimes described as chaotic, due to the overwhelming number of scooters on the roads. In fact, scooters outnumber cars by an uncountable margin. You’ll need eyes on the back of your head to be aware of all the movement. Stay focused on the road and watch what’s happening in front of you.

One of the quirks about driving in Taiwan involves fault in the event of an accident. If, for example, some reckless kid on a scooter runs a red light and you happen to hit him, it still may be considered your fault because you didn’t yield to prevent an accident — regardless of the other party’s wrongdoing. In many cases, the injured motorist will be looking for a cash settlement for damages — often on the spot. If you’re involved in an accident, never admit fault and wait for the police to come and file a report.

Navigating the north, west, and south of Taiwan isn’t very complicated, but the East Coast is mainly traversed by one of two main routes: Highways 9 or 11, both of which are prone to landslides and falling rocks. Sometimes these events cause roads to be closed for weeks or months. Highway 9 is the inland route that runs in a valley between mountain ranges, while Highway 11 hugs the coastline, and thus, much more liable to natural disasters.

Are you driving a rental car in Taiwan?

Frequently asked questions about renting a car in Taiwan

1. What is the best time of year to book a rental car in Taiwan?

2. Is it possible for one way rentals in Taiwan?

3. Should I rent a round trip or one-way rental in Taiwan?

4. Which location should I rent my car from in Taiwan?

5. Do I pay more fees and taxes for renting a car at the airport in Taiwan?

6. What insurance do I require for driving a rental car in Taiwan?

7. What is the best way to save money on rental car insurance in Taiwan?

8. Should I prepay my rental car booking in Taiwan?

9. What are the largest numbers of vehicle seats available for a rental car in Taiwan?

10. What types of sports and special cars are available in Taiwan?

11. Can I take my rental car across borders in Taiwan?

12. How do I inform the rental company I will be crossing a border from the Taiwan?