Search For Your Rental
IN VIRGIN ISLANDS, U.S. OR NEAR YOU
Pick-up 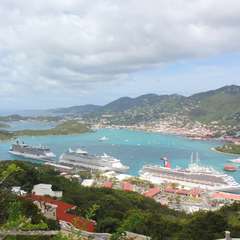 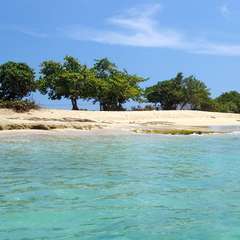 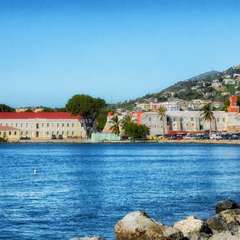 About the U.S. Virgin Islands (VI)

The U.S. Virgin Islands (VI) are situated east of Puerto Rico in the North Atlantic Ocean and the Caribbean Sea, consisting of the islands of St. Croix, St. John, and St. Thomas.

The territory is located in a key shipping lane for the Panama Canal, the Anegada Passage, its climate tempered by easterly winds and low humidity. Although the archipelago is generally defined as mountainous with few level or low lying areas, each island has its own characteristics.

St. Croix is the largest island and mostly relegated to industrial and agricultural production — it receives the fewest number of visitors. St. John is considered to be the most relaxed of the trio, with more than half of the land area set aside for Virgin Islands National Park. Finally, St. Thomas is home to the vibrant capital city, Charlotte Amalie.

All three islands are accompanied by a number of smaller outcroppings, atolls, and cays. Although primarily considered a destination for aquatic activities, the U.S. Virgin Islands supports a fair number of land-based adventure and wildlife opportunities.

With a wide range of activities, visitors are encouraged to rent a car in the U.S. Virgin Islands in order to maximize the value of their travel itinerary. The top destinations are linked by roads in fair to good condition.

However, a great deal of navigation on the islands will involve mountain driving with narrow roads and tight turns, so caution is advised. Driving in the U.S. Virgin Islands can’t be discussed without a mention of the left-hand conundrum. Unlike most U.S. territories, traffic on the islands travels in the left lane. Most of the cars are left-hand drive vehicles imported from the mainland. This complicates both visibility and orientation, but once you get the hang of it, navigation will pose few problems.

Some one-way streets and a couple of potholes here and there are the only nagging concerns. That said, parking is at a premium in many of the tourist hotspots, so be prepared to pay a bit extra to park in a safe place.

Tips and advice for renting a car in Virgin Islands, U.S.

The highways are numbered, but most streets are poorly marked, so reaching your destination may involve the use of landmarks.

Check with your U.S. Virgin Islands car hire provider about inter-island travel on one of the numerous roll-on/roll-off ferryboats.

St. Thomas has the most developed network of roads, but St. Croix is considerably easier to navigate. St. John is largely undeveloped and the least accessible of the three islands.

Some parts of Charlotte Amalie are not safe after dark. Meanwhile, it’s not advisable to leave personal belongings in your car hire, particularly when parked at public beaches.

Rent an SUV or 4x4 if you’re planning to do any amount of mountain driving. Some road conditions are especially rugged.

Sidewalks are only found in the major developed areas, so be extra alert for pedestrians and bicycles on outlying roads.